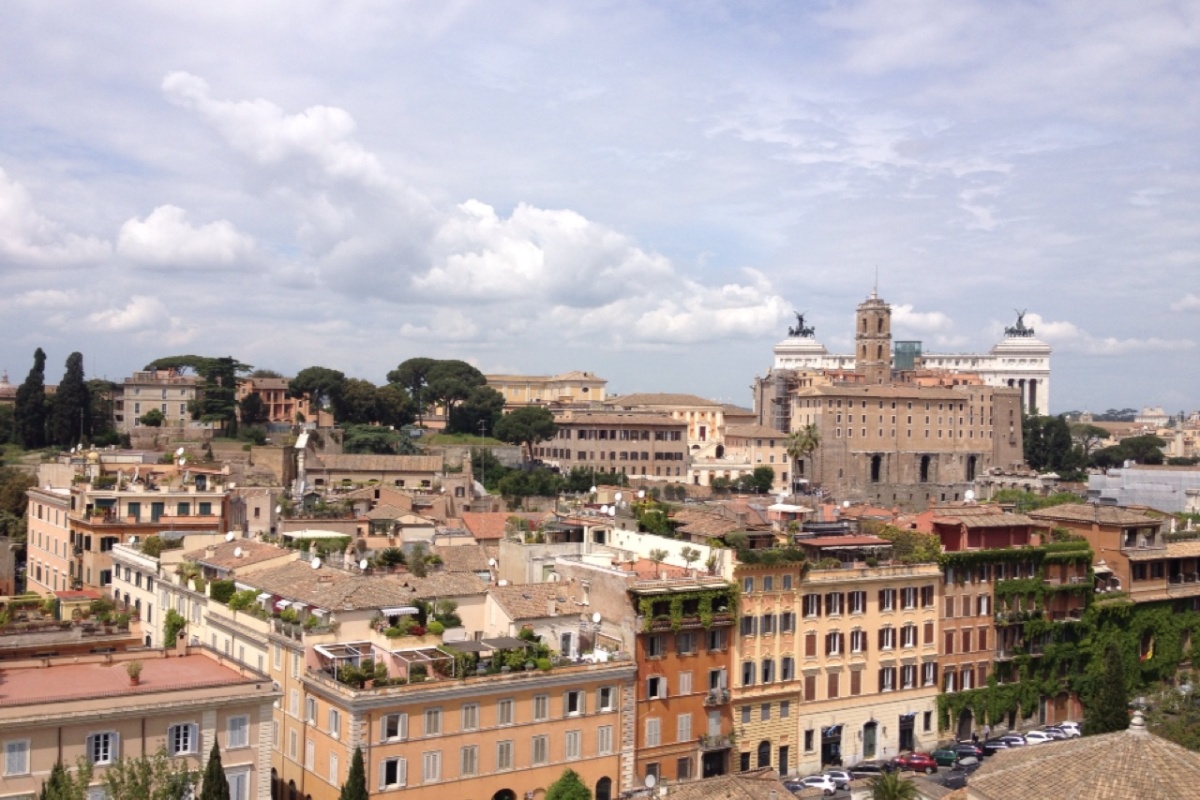 Once in Rome we got off the bus and started a 5 hour walking tour of the cities main sights. We saw the Roman gates, Spanish steps, Trevi fountain, pantheon, Piazza Navona, Piazza Venezia, Roman forums, Capitoline museums and the Colosseum.

(The blue was our walking tour) 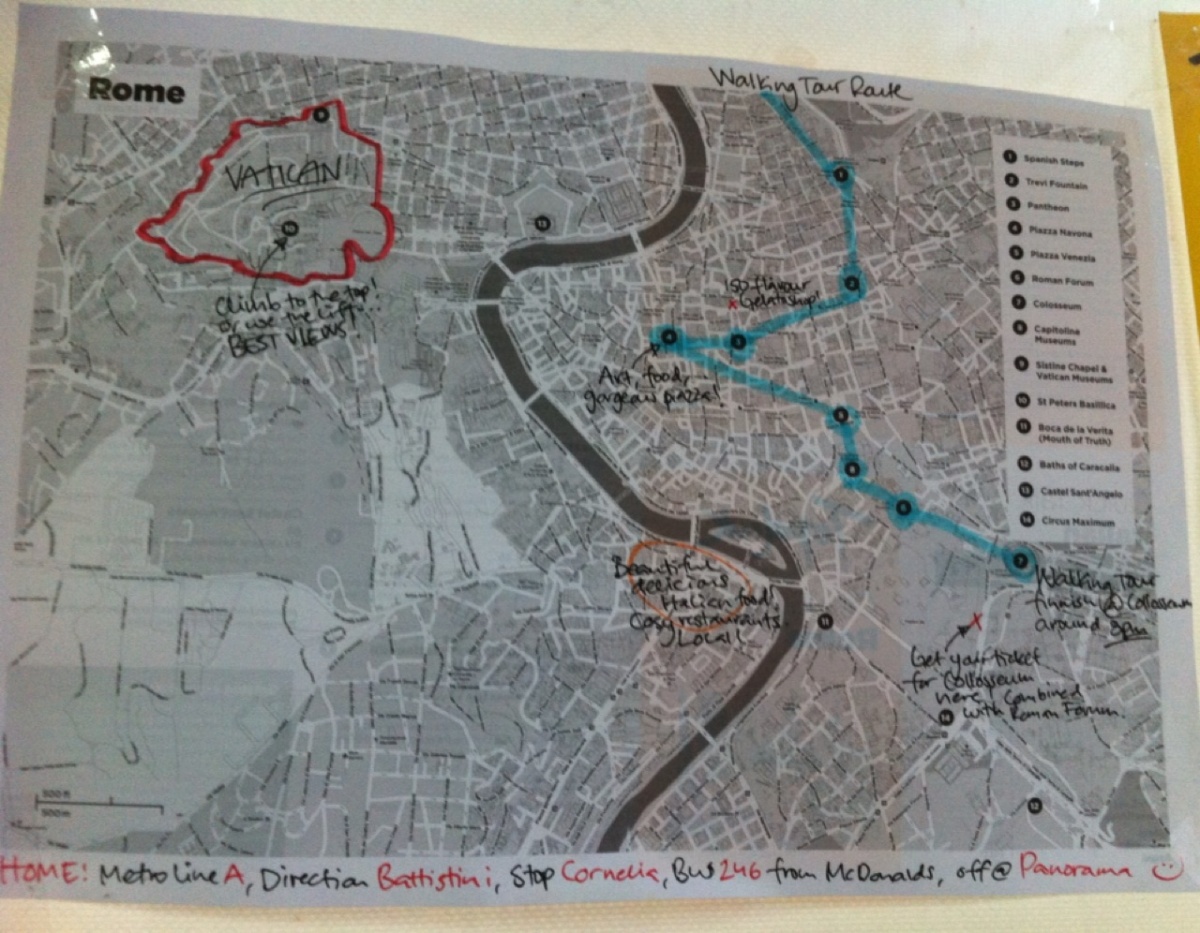 The symbol of Rome

We had a gelato break at a gelato shop that had 150 flavours! The flavours included 14 different kinds of chocolate, kit kat, twix, Roche and a range of soy flavours. 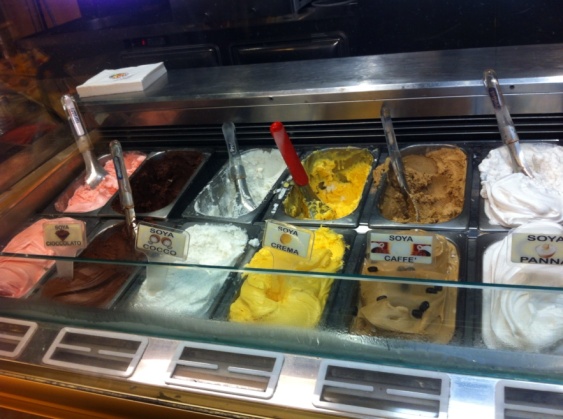 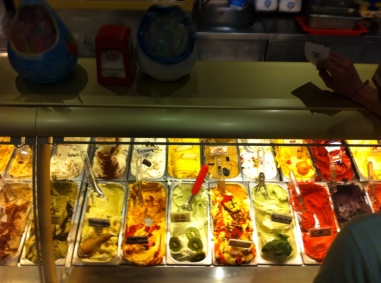 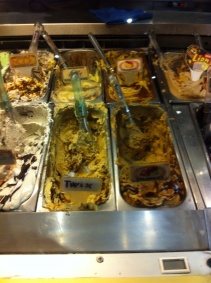 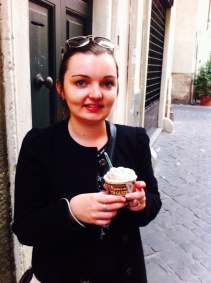 We walked up all 138 Spanish steps and had a good view over the city. 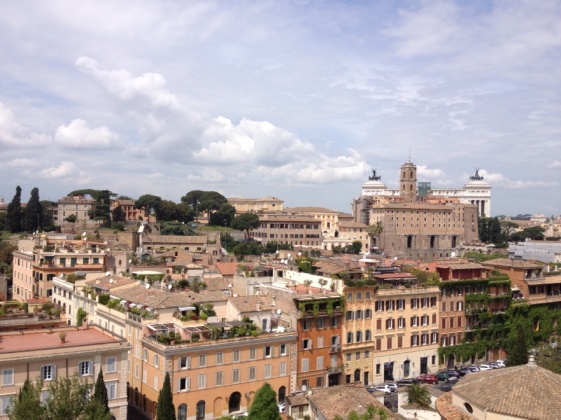 We also threw a few coins into the Trevi fountains. 1 coin is supposed to mean that you will come back to Italy, 2 coins to make a wish and 3 coins to marry an Italian. Both Shaun and I did 2 coins each to make a wish.

The history about the Romans was really interesting especially hearing about the twins Romulus and Remus who were thrown into the river as babies and found by a wolverine who took them on as her own. They then went on to build two big churches in Rome but Romulus decided Remus was a threat as he was stronger and only one of them could be king so he killed him. Today there is a statue to represent the twins. 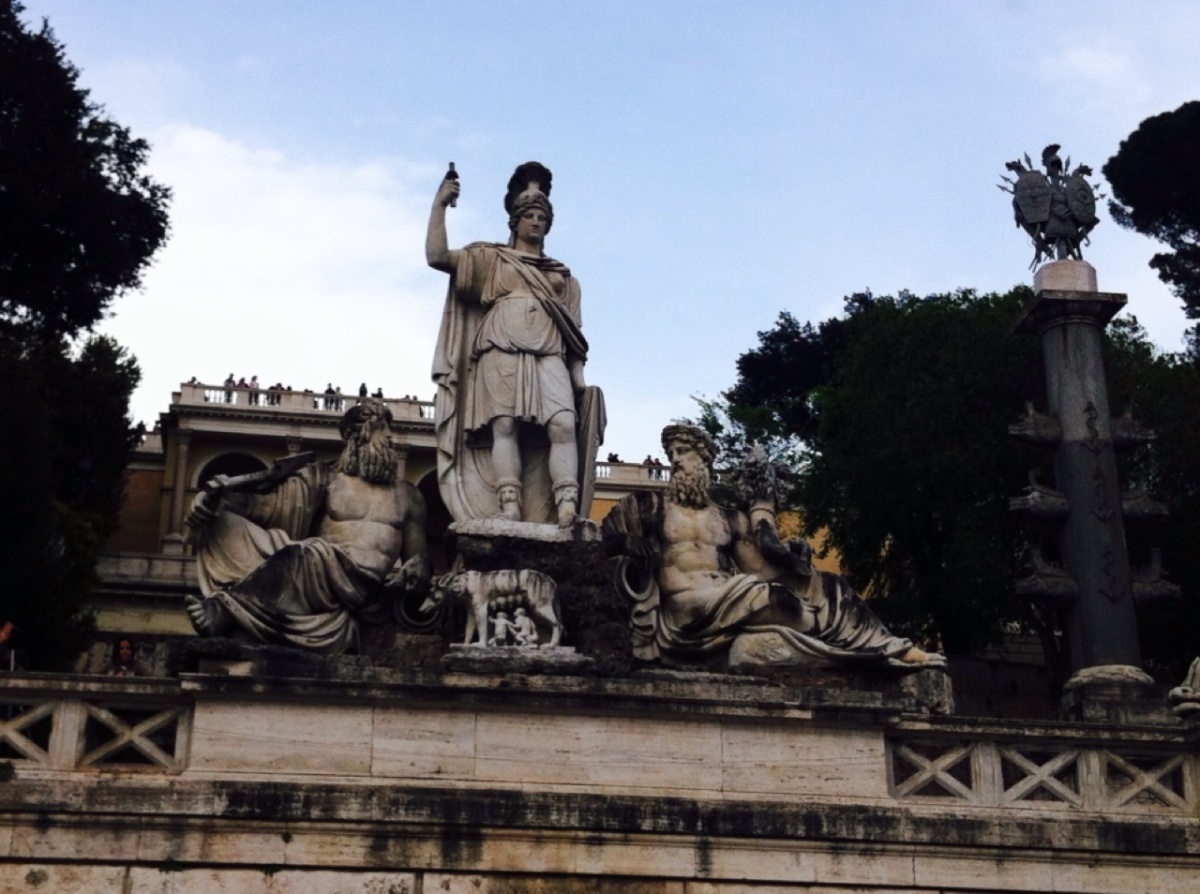 We went inside the pantheon which is a 2000 year old temple, now a church. The dome is what makes this church unusual, it has a massive hole in the top which means that rain, snow etc will fall into the church but it also means there is a lot of light. It’s opening is called the oculus and it’s a 8.7m opening that acts as a compression ring. Inside are the tombs of Raphael and kings vittorio Emanuele II and Umberto I. 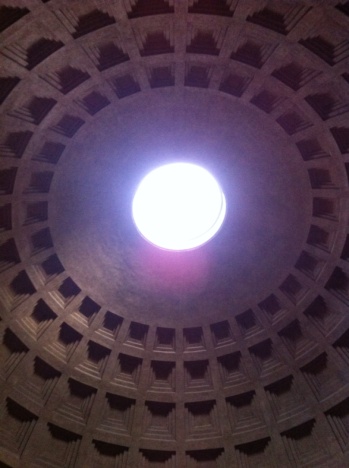 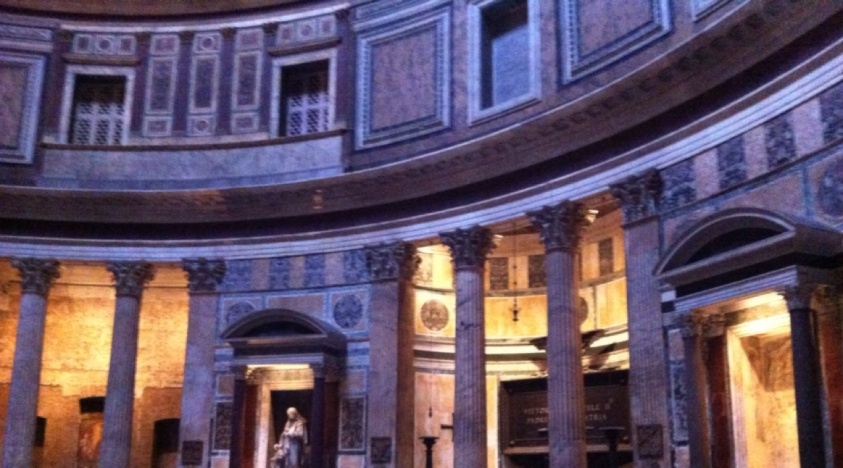 On our full free day in Rome we went to the Vatican City in the morning then in the afternoon the roman ruins, palatine hill and the colosseum. We were amazed at how the Vatican is considered it’s own country so technically we were in another country for the morning. We walked all around the Vatican including seeing the old vehicles used for the popes, Indonesia museum, the gardens, St. Peter’s basilica and we even went to St. Peter’s square where the pope was talking so we actually saw pope Francis. We wanted to see the tombs of the old popes but there was to many people around since the pope was speaking.

We finished the afternoon off by heading to the roman forums where we bought a ticket that got us into the colosseum, roman forums and the palatine hill (which meant skipping the lines!). We walked around all the roman forums which we found interesting as they were real roman ruins and there were boards that explained what each ruin section was.

The colosseum was Shaun’s highlight, this is where gladiators fought each other and animals. We found out that people/animals would only die if the whole colosseum was full of spectators or if a special person was in the audience. 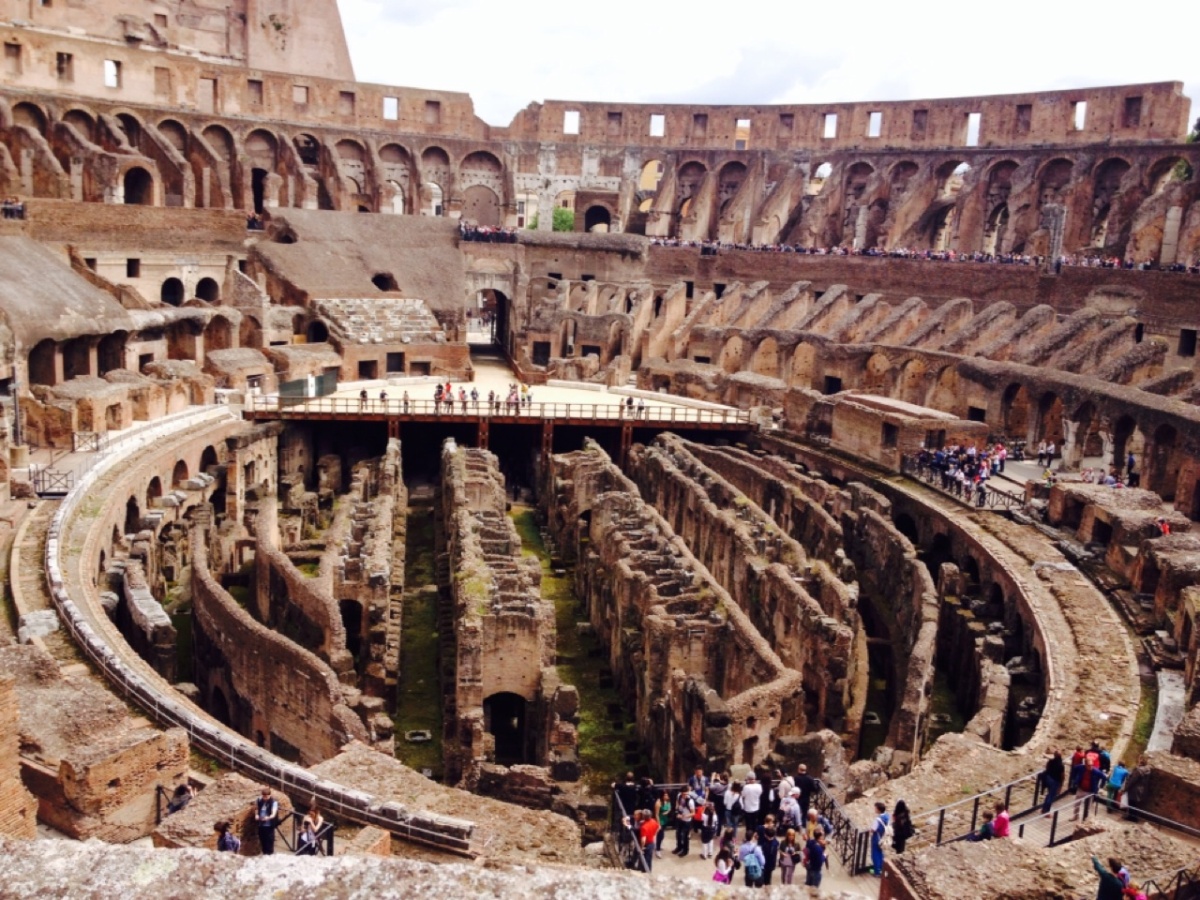 Rome was also where we finally found good pizza… by good I mean our expectations were pretty high! We found a little place in the metro station and the pizza was the nicest we have had in Italy so far.